This video from the versus series shows a Wing Chun athlete vs Kick Boxer in which two different boxing styles are once again testing their differences. 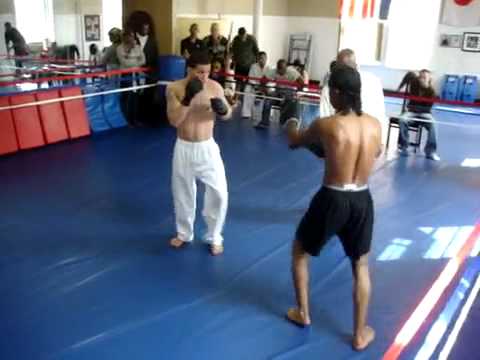 The video was published by RAHSUN HERKUL, a Chief instructor of the Global Traditional Wing Chun Kung Fu Association. If you would like to contact him you can check out his website. His gym is located at 16045 Leadwell street Los Angeles, California.

This short encounter between two athletes shows more than what you would expect. In fact, both fighters could be described as equally good. The match finishes with parity. A great misconception of Wing Chun sees this style as a martial art referred to inner energies and scenographic useless movements. However, the truth could not be further away.
Both styles are very practical and down to Earth, and this match shows it perfectly. Of course there are some differences.

Two different styles, but how much?

In Wing Chun,  punches focus on the center line. In this way the attack is accompanied with self defense. However it takes some time to be able to strike a powerful punch. Consequently, constancy in training and a very practical approach are the basis of this style. If not, you'll end up with the worst Wing Chun possible. Boxer's trainings are very different since this style of box expects it's athletes to train hard. Long trainings are focused on gaining muscles too. At the contrary, Wing Chun doesn't make of strength it's primary weapon.
Both styles are very efficient when practiced well. Unluckily, Wing Chun might be much more challenging.

It must be said that we do not intend to incite any kind of violence in our viewers and readers. The only purpose of the versus videos is the study of the behavior and the techniques used by fighters, underline what to avoid and learn from other's mistakes.
Although what is very fascinating is to see how different practitioners put into practice traditional martial arts concepts.
So, whenever you feel curious about martial arts practitioners putting themselves to test, our versus videos are for you!