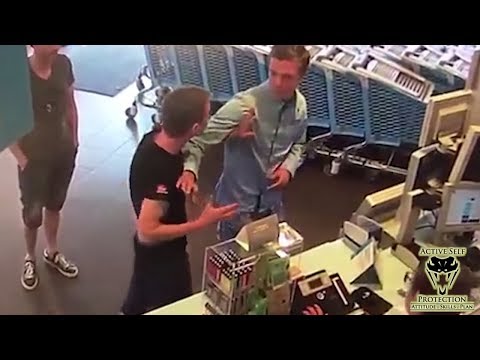 This video was posted on Active Self Protection channel and, as the Youtuber declared, we don't know for sure if the guy is a real judo practitioner or if he has some experience in martial arts but it is pretty sure that he has some grappling skills. By the way, if you are interested in street fighting it could be very useful to analyze the technique used by the defender to quickly immobilize and control the offender.As you can see, he reduced the engagement distance very quickly and, after using a very good leverage, he used all his weight to immobilize the offender on the ground.

Keep calm and assess the situation

In the case you are involved in a street fight, it's fundamental that you keep calm. Taking decisions under stressful situations can be very hard and challenging, and panic is never a good option when it comes to handling the situation. So, first of all, try not to freak out and ask yourself whether fighting is really the only option your are left with. There's no shame in avoiding such a situation, most of the times it's the best response you could have. In fact, most of the times it really isn't worth it and you may also deal with health or legal issues.
But of course every situation is different and there's no such thing as one right reaction. In the worst case scenario, in which you are forced to fight, use as much strategy as you can.

Useful tips in case of fight

As stated above, in case you are forced to fight there are few simple rules that you have to keep vividly in your mind:

Keep your hands up

Don't let your hands fall down: raising up your hands is a good strategy to intercept offender's strokes and can help you to bring some punches to the target. Hands are almost invisible and this can be an advantage if you are planning to attack as first. However, keep in mind that this could be a very dangerous strategy to use in a real street fight.

If you are involved in a fight with multiple offenders don't let them surround you, therefore move your body in order to face them one by one. Use the space to get an advantage and do not let them take over.