“Once upon a time in Hollywood” is a fresh new film by Quentin Tarantino. You can see the trailer here upwords. Since it came out a lot of discontent came from Bruce Lee fans. So what is this Bruce Lee controversy all about?
The main gripes are from Shannon Lee and Kareem Abdul- Jabbar, respectively his daughter and his friend. Discover what they they have to say about it down below.

After Shannon and Kareem attacked him, Tarantino thought it would be appropriate to declare publicly his position regarding the controversy that was brought up around the Bruce Lee scene.
During the interview with Deadline he clearly explains how his depiction of Bruce Lee is realistic and accurate.

I heard him say things like that — to that effect. If people are saying, ‘Well he never said he could beat up Muhammad Ali,’ well yeah, he did. Not only did he say that, but his wife, Linda Lee, said that in her first biography I ever read…. She absolutely said it.

Quentin says that he depicted Bruce as an arrogant guy, because he truly was like that. Besides if that is true or not, many have also talked the fight that occurred in the movie. The fight was between Bruce Lee and a Cliff Booth, a character interpreted by Brad Pitt. Many refer to it as a non- sense since Bruce was an athlete on a whole new level. In the film the result of the fight remains a mistery, since their figth gets interrupted before it came an ending.
Hence, Tarantino pointed out as follows:

However, Cliff is an ex soldier in the movie, and this way he is an expert fighter too.

What Bruce Lee is talking about in the whole thing is that he admires warriors. He admires combat, and boxing is a closer approximation of combat as a sport. Cliff is not part of the sport that is like combat, he is a warrior. He is a combat person.

However, Quenyin has his own idea on how the fight would end if it really happenned. As he says, if the match would take place in Madison Street garden Lee would win. But if the two of them were brawling in the jungle of the Philippines:

Cliff would kill him.

Shannon Lee could not disagree more with Tarantino

After seeing the film by herself, Shannon could not but point out what she calls a “poor and unrealistic interpretation” of her father.
In an interview released for Variety she said:

Shannon pointed out how his father’s self confidence could be easily mistaken for arrogance. However she does not want to remember him as a perfect man, but more like the man he truly was. She was particularly upset about Tarantino’s response to the criticism and to it she has to say the following:

[Tarantino] can portray Bruce Lee however he wanted to, and he did. But it’s a little disingenuous for him to say, ‘Well, this is how he was, but this is a fictional movie, so don’t worry too much about it.

It seems like Tarantino’s Bruce lee wasn’t apppreciated by the Basketball champion Kareem Abdul- Jabar who starred with Bruce lee in his latest film: Chen’s last fight. He seems to agree with Shannon since this is what he thinks about this matter:

Of course, Tarantino has the artistic right to portray Bruce any way he wants. But to do so in such a sloppy and somewhat racist way is a failure both as an artist and as a human being.
That’s why it disturbs me that Tarantino chose to portray Bruce in such a one-dimensional way. The John Wayne machismo attitude of Cliff (Brad Pitt), an aging stuntman who defeats the arrogant, uppity Chinese guy harks back to the very stereotypes Bruce was trying to dismantle. Of course the blond, white beefcake American can beat your fancy Asian chopsocky dude because that foreign crap doesn’t fly here.

Have a nice Wing Chun 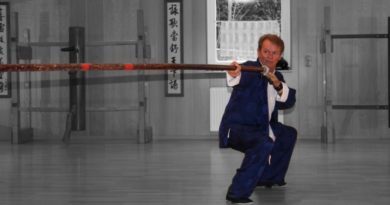 One thought on “Bruce Lee controversy in Tarantino’s new film”