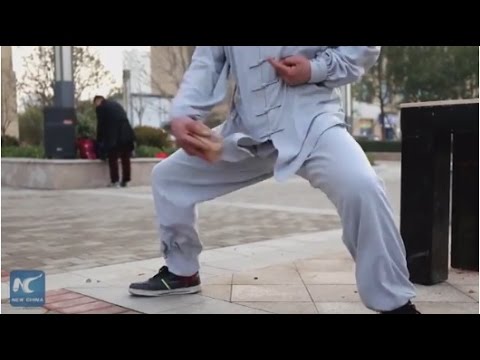 Most men consider their manhood vulnerable to a hard impact, a weak point. But these guys seem like they might change our minds forever with their Balls of Steel!
However, the true question is: is there actually a scientific explanation or is it just an optical trick? Let's discover it together.

The old master in this video is Wei Yaobin. He actually became famous in China for his special skills, known by everybody as the iron crotch man. And that's not all. He also teaches these iron techniques to anybody who is curious about it. His classes attract hundreds of students each year. The one that you see in the video is in fact a public demonstration of this strange practice.
How do they do that? And above all why do they do that?

The answer might actually surprise you.
Master Wei says that the practice helps to combat erectile dysfunction and premature ejaculation. How do you ask?
There's actually no scientific proof so far. However, traditions say that it's all about hardening the tissues and improving circulation, giving you the ultimate Balls of Steel.

How to do that?

First of all, it might be clear for your own benefit, that we wouldn't recommend trying this at home by yourself. If there's a possible way to train your nuts, you better talk directly to the professionals.
However, the internet is one big great place, let me tell you. And nowadays you can find almost anything. There are many exercises to obtain the balls of steel that you dream of, and luckily they're divided by difficulty. If you want to check something more about it, you can find more info on this website.

Indeed, there are always many shades and versions of every story. Many argue that it's a muscle trick.
Shaolin temples were frequently attacked by intruders. As many stated, monks were famous for having incredible supernatural powers and skills. Since their reputation was that of skilled fighters, it was a way to defend themselves and prevent attacks.
So, it might be that it is possible to train a specific muscle just beneath the testicles. By training, it is apparently possible to lift up the sack, along with the upward hip movement, and change the impact point. This way it wouldn't be true that they hit their nutsack, but just inner tights.

You never know which part of the story is the right one with these things. But one thing is sure, try to believe.
And, please, when you'll train your iron crotch, or if you already have it, let us know about it. I assure you, we would be very interested to discover something more about this subject.